This gardening season was special, filled with so much anticipation that the wait seemed to last forever. I knew in the end it would be worth it. Those elusive lotus blooms that had evaded me last year were going grace us with their beauty. To get to enjoy these beautiful flowers sitting right here on my deck……what more could the gardener in me ask for! 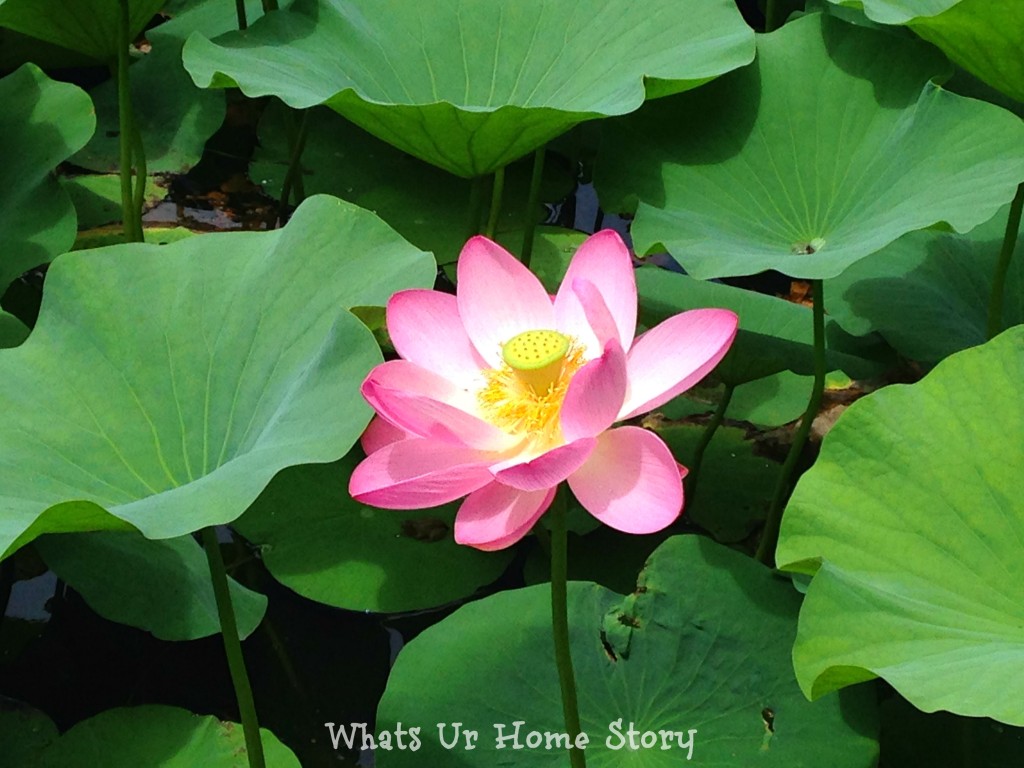 But no, that beautiful dream was not to be….at least this year for I made a silly (so dumb that it breaks my heart to think of it) mistake.

Flash back to mid June when my lotus was doing great, so great that it had filled its pot and I had to water it twice a day. 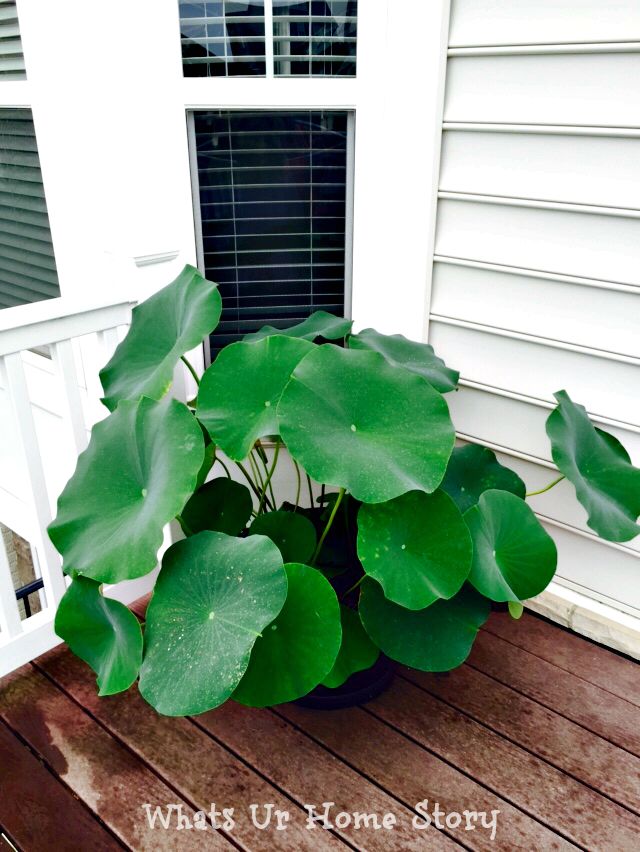 One of those days B injured his ankle while playing soccer (may seem totally unrelated to lotus growing but keep on reading). His ankle was pretty bad as in heavy swelling bad. He used to soak his foot in a bucket of ice water every night in an effort to reduce the swelling. After soaking his foot he’d keep the bucket aside, the next day add more ice to it, and reuse the water. In a matter of days the bucket was more than half full.

Switching to our parallel lotus track – As I said the lotus was getting too big that the root ball now took over the entire pot, which left very little room for water. Especially in the hot weather the pot would be dry by the time I came back from work. As the pot was on our deck I had to lug the hose up every time I wanted to water it. Doing this twice a day was getting to me. So most times I just resorted to using a large bowl from the kitchen as a watering can. This in turn lead to the pot not being filled to the brim (‘coz I was lazy to do many trips) which in turn left it dry sooner….

One evening I saw the bucket of water that B’d used to ice his foot and thought, “That’s a lot of water and it is now at room temperature. Maybe it is time to change out the water so why don’t I just reuse it? There was enough water to fill up the lotus pot to the brim and this way watering the lotus would be covered for a day.” So I ended up using the bucket of water for the Lotus. Win win! I think I repeated this one more time before things took a turn for the worst.

B’s swelling didn’t show much improvement so when someone suggested that salty ice water was great for reducing swelling he added salt (a LOT of salt) to his bucket of ice water. And what do you know? We watched in pure amazement at the swelling go down and wondered why we had never heard for this trick. As his swelling got better I still kept at my mission of reusing the ice bath water totally forgetting about the fact that now there was SALT in the mix. I took great care to wait till the water reached room temperature so as to not shock the lotus but the salt……..totally escaped my mind. I did this twice and the next day woke up to this…. 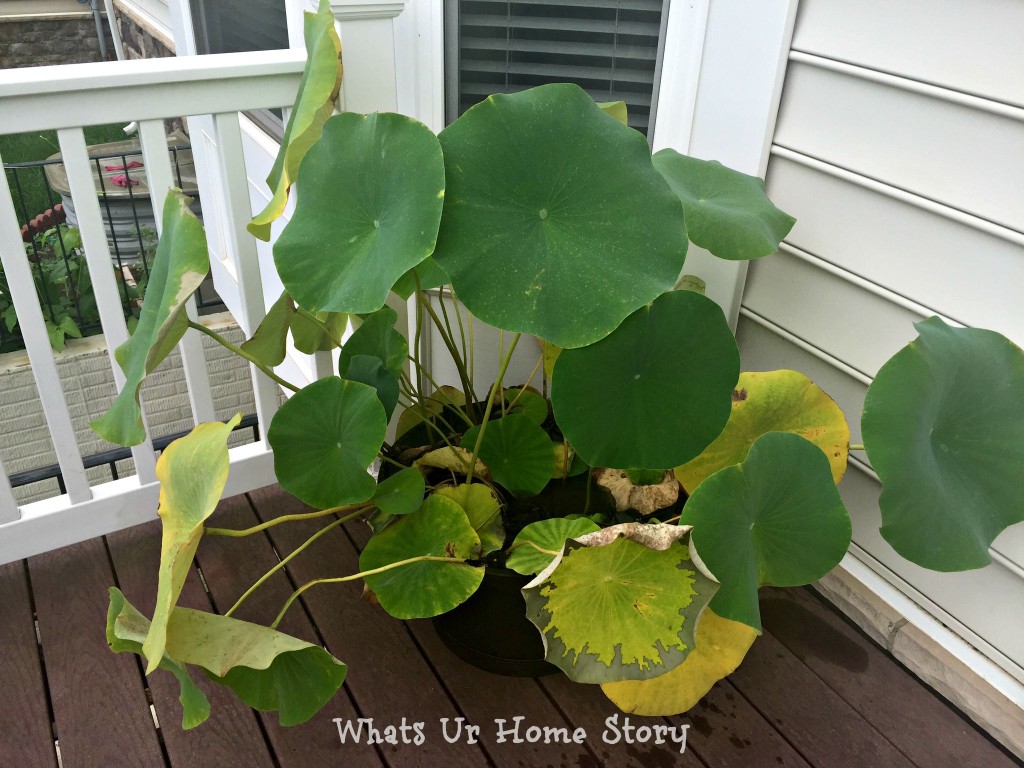 And wondered what happened. That funny pattern on the leaf puzzled me so much that I decided to give it one more day before I did some serious research online. 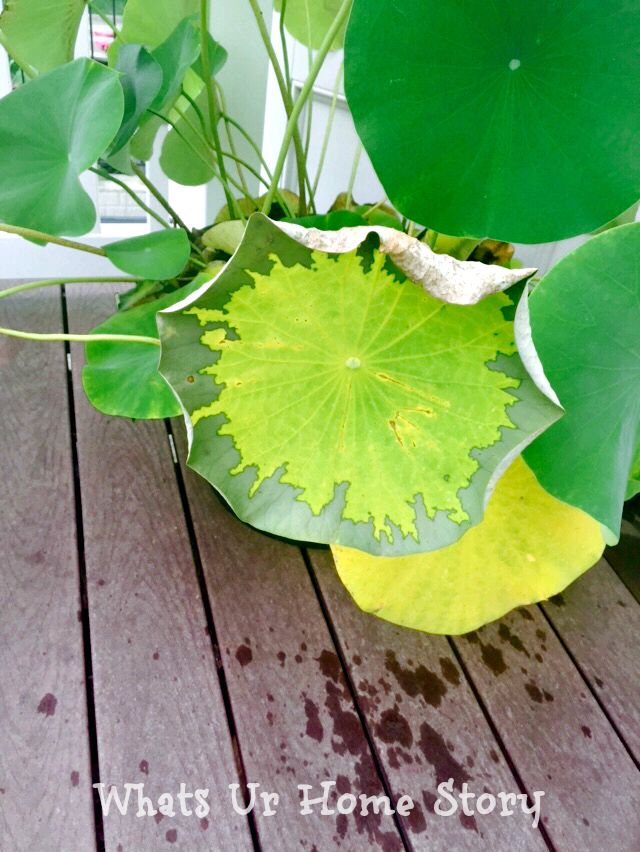 Day 2 after this scene as I was pouring my “salty” ice bath water in the lotus pot for the third time it hit me like a lightning! I was shocking the lotus with salt! It was as if I had picked up my lotus pot and dumped it in the ocean. The water was that salty! The moment I realized it I poured all the salty water that I had just filled the pot with it, rushed down, pulled the hose up, and flushed the pot out 3-4 times all the while brushing my tears off. What can I say, that was a long stressful morning which ended up in me getting into work late. 🙁

The next day things looked even worse. 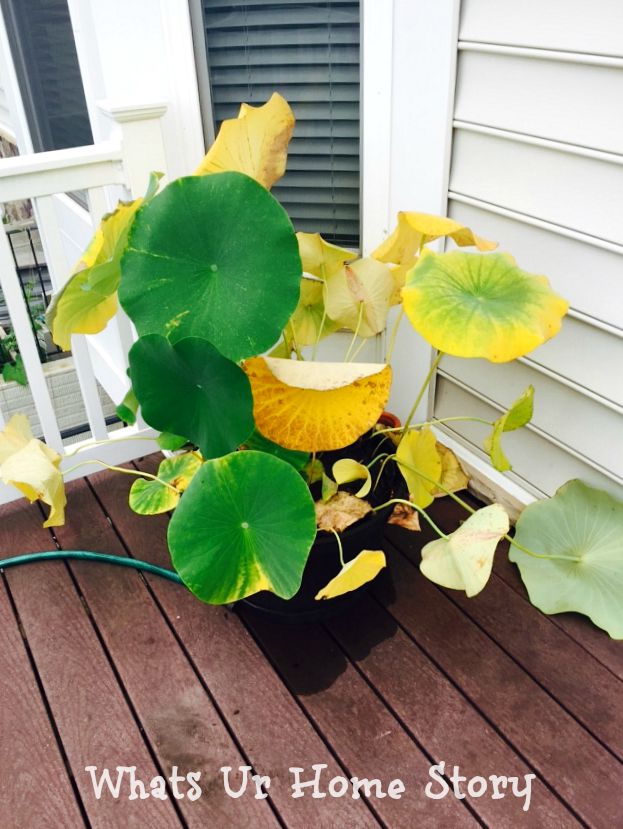 As each day went by more and more leaves turned yellow. I kept flushing the pot out 3-4 times morning and evening promising myself to never be lazy about watering plants again.

1.5 months have since passed and I think even though I managed to kill most of the plant a little bit has survived and is fighting it way back in. The pot now looks as it did back in Spring. 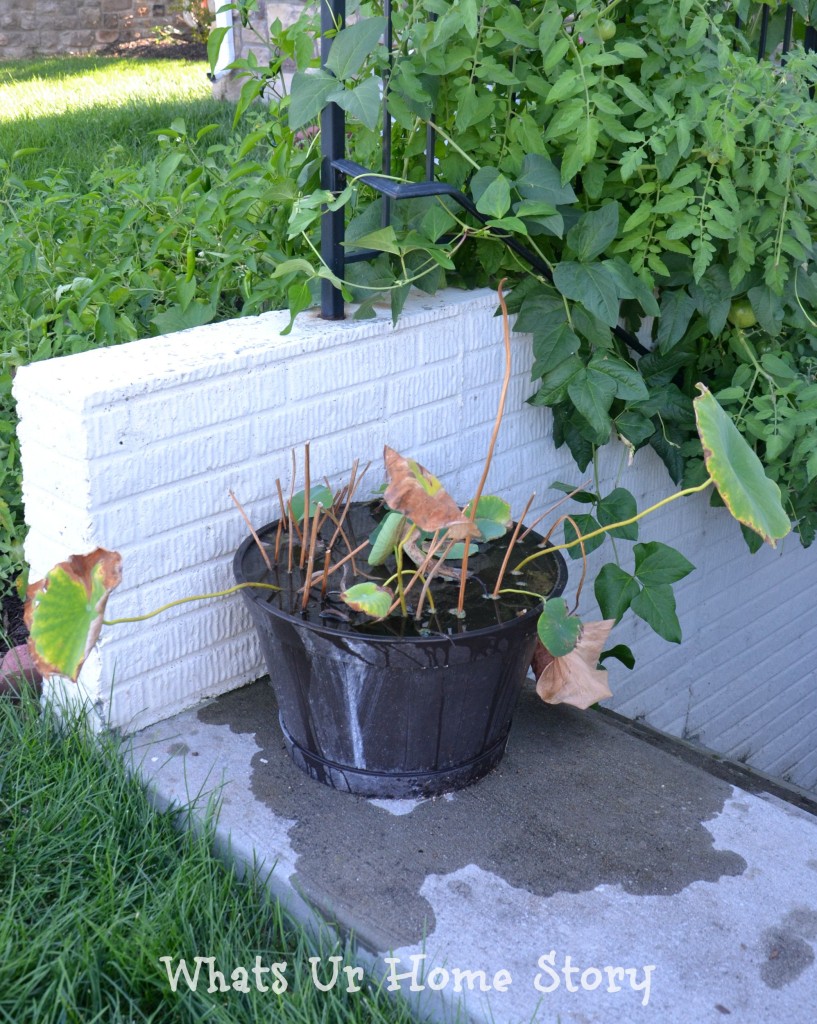 Every time I look at it it hurts. I had taken the short cut just so I could avoid pulling the hose up the deck….. if only…….

Now my only hope is that this guy manages to hang in there till next Spring (see how you can overwinter the lotus). I promise I’ll make it up to you next year my dear lotus with a roomier pot and a lot more love.

Have you ever made any silly gardening mistakes like these?