you end up with this! 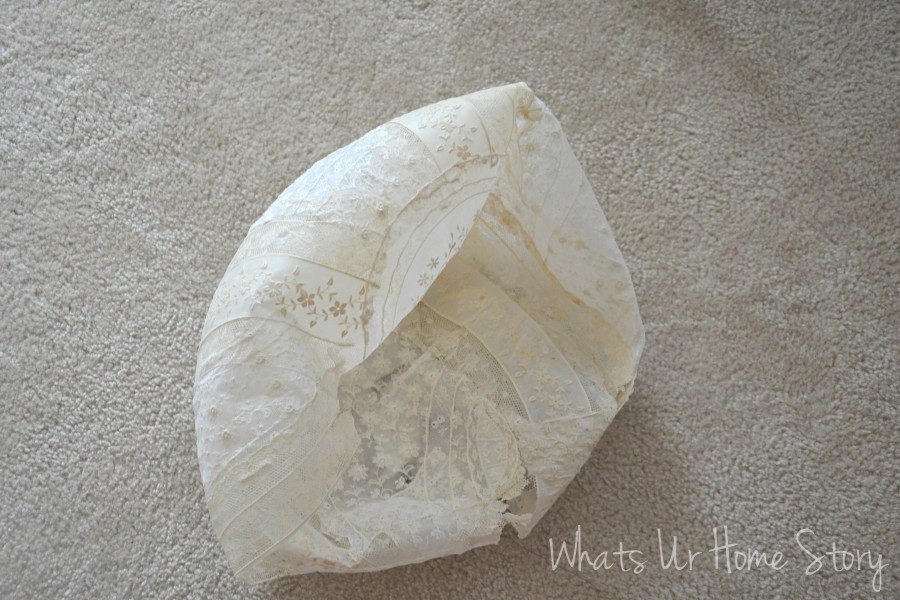 Didn’t expect that, did you? Yeah..yeah… that’s the same one I was proclaiming to be a success last week! Now that you’ve picked yourselves up from the floor, closed your jaws let’s rewind…..

A  month and half ago (that’s how long this sucker took) when I started this vintage lace chandelier I had no clue that this is how it is going to turn out. Headsup: This is more of an FYI/venting post. In true Vidya fashion I’m not gonna give up and will definitely give it one more try before I call it quits for good. So will let you in on the details of the products I used etc. in the next post. 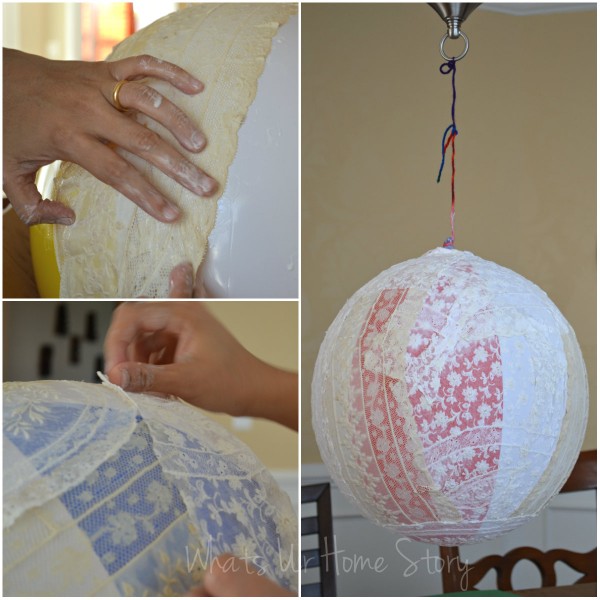 In retrospect the project was doomed from the start. At every step it was a constant battle of who got the upper hand. As you can see trouble started as soon as I pulled the beach ball out of the dried lace shell. 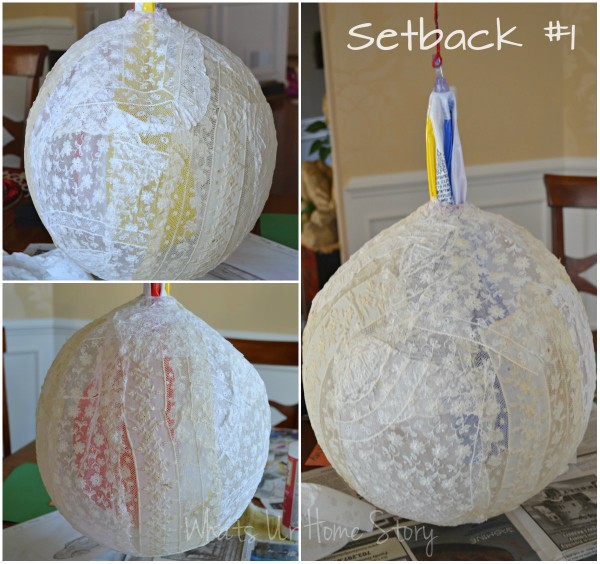 Not one to give up I sprayed water on the whole thing and set to work again only to be met with even more resistance. That dismal looking deflated lump was the biggest red flag, which I chose to ignore in all my optimism. 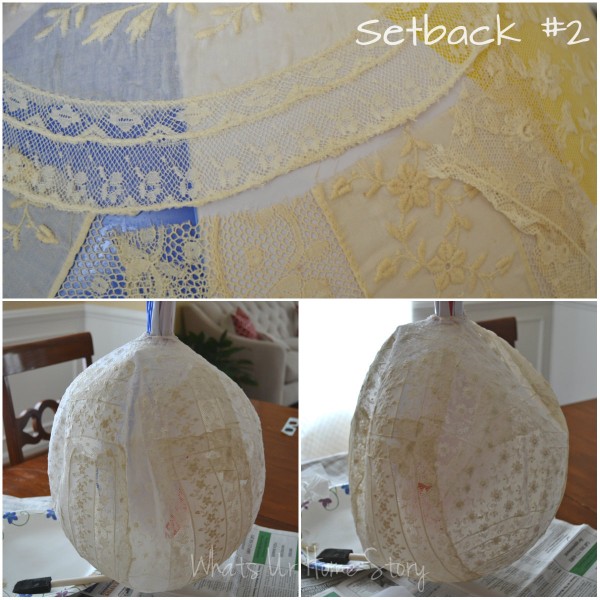 To top it off now I was even having ripping seams ‘coz I scrimped on overlapping the lace while Mod Podging. 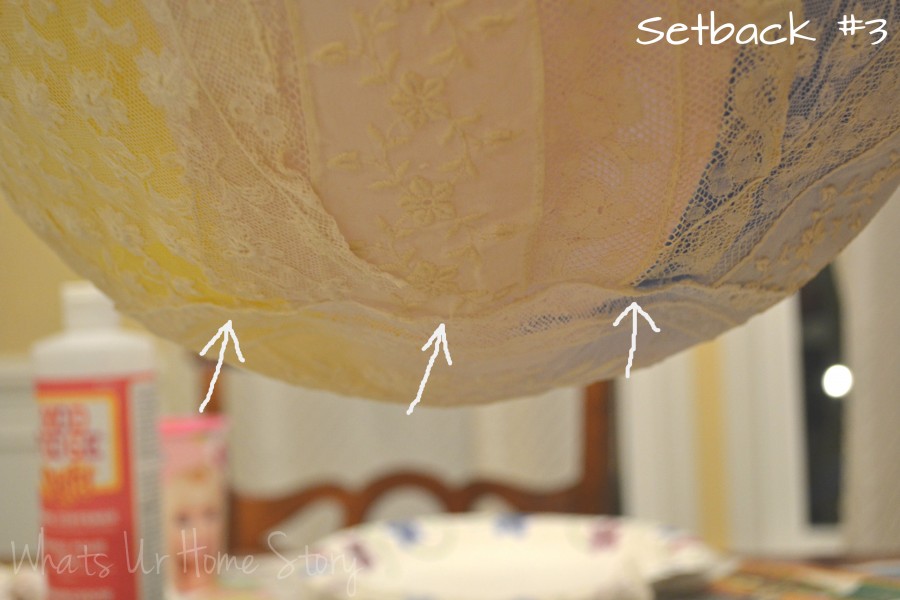 Like the best trooper there is I plowed along. This time around I thought I finally got it even though there was a teensy dent on the top.

Then came the ‘hanging’ part. We tried every trick in the book to attach it to pendant kit. 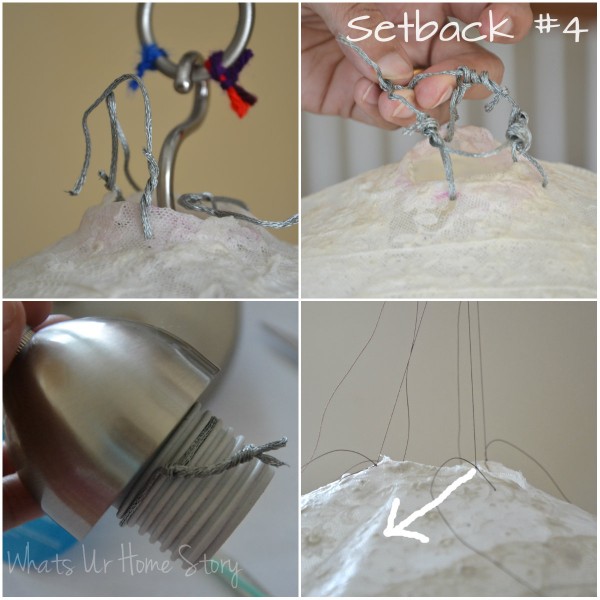 Should add that I might have dropped it at least 10 times (each time denting a diff part) during the whole ordeal. With every dent I would go back in with my trusted dent fixing invention and flush it back to shape. We even managed to hang it and it looked fabulous. I did a victory dance, got a great high five from my strictest critic; my son, and an admission of  “it looks good” from B who had been skeptical about the whole thing. That’s when we realized that the bulb we had used was the 40 W under the cabinet light which was not at all bright. we thought  “we should change the bulb into a regular one or else the light would be of no use” and dismantled the whole thing and tried again.

Little did we know that this last attempt was the last nail in the coffin! See that arrow in the earlier pic? That dent and another small one all of a sudden became bigger. The top definitely looked off now. That was it! I had had enough and  pulled the whole thing down and stamped on it (I was standing on the ladder) and burst into tears. Yes, I was having a tantrum. After having poured my heart and soul into the project for almost 2 months! Do you know as weird as it sounds, the first time I saw the glue harden I even kissed that thing ‘coz I was so happy. It was beyond frustrating. 🙁

This is where we are now. 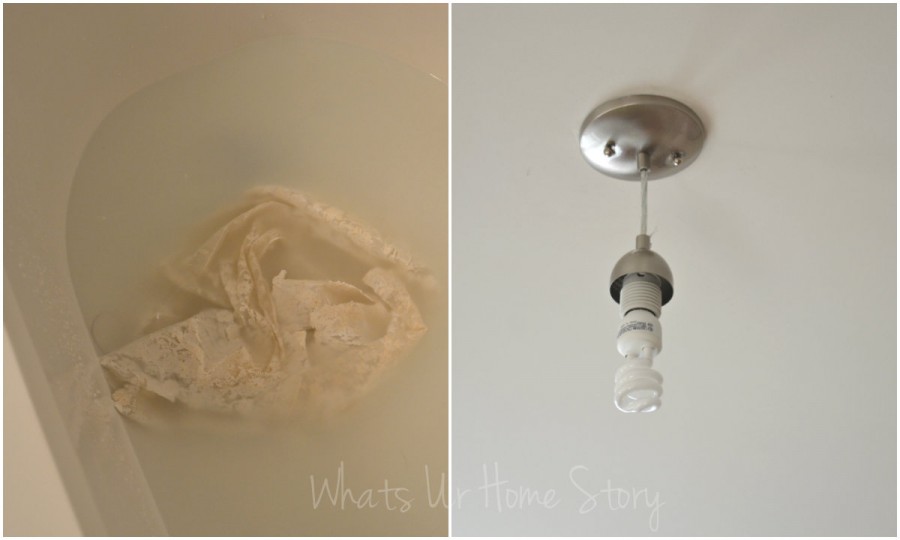 The lace is soaking in the bath tub so that I can reuse some of that gorgeous lace and the pendant kit waiting for round 2. No worries, I’m not the one to be deterred by this DIY chandelier project fail rest assured I’ll be back with more lacy chandy stories soon.

« Wallpaper is Back with a Bang
Filling the Creative Void »