Tomorrow is Vishu, the Malayali New Year. This post is a tribute to my Malayali roots. For those of you in the dark, I am from Kerala, a state in South India. The people from the state are called Malayalees as they speak the language, Malayalam. No, I’m not going to dwell into the religious or cultural aspects of the festival (even though I would love to) as I plan to keep this a purely decor focused blog. So today, I try to take a look at my culture thorough a decorator’s glasses. The first and foremost thing that comes to mind is the use of lamps in a Malayali’s daily life. I’ve posted about the exquisite lamps that you find in Kerala homes before. But the most underrated and overlooked lamp of all is the true Malayali lamp, the nilavilakku. 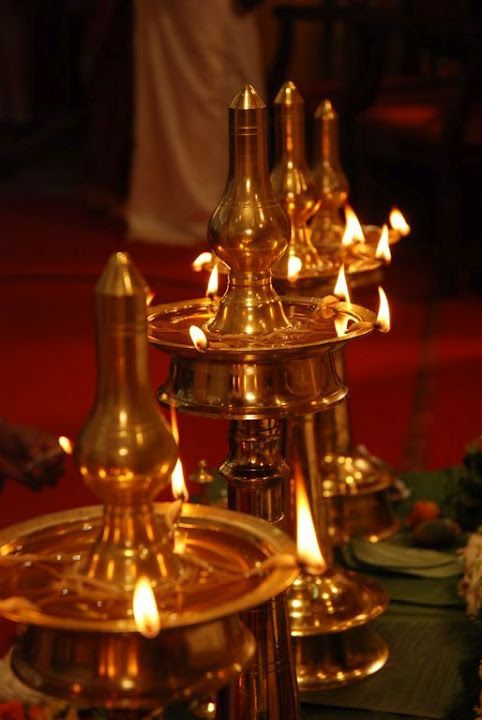 I came across these pictures in my cousin Anu’s wedding album and had to blog about these beauties. A lighted lamp stands for auspiciousness and is considered a welcoming sign. In a traditional Mallu (the overused nickname for a Malayali) wedding these play an integral role. You line them up in odd numbers (usually 3 or 5) in front of the wedding madapam (alter) and light them with oil and wicks. 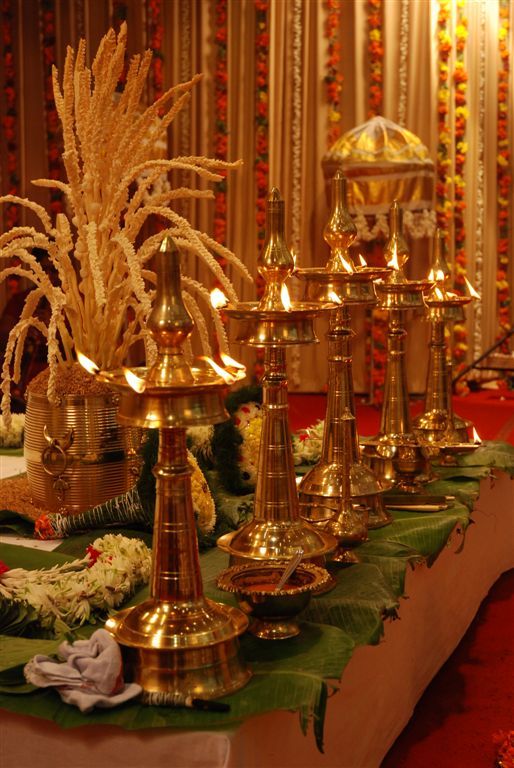 Behind the line of lamps, is the bouquets (we have bouquets for the bride and groom) and the garlands. And behind it standing tall is the ‘para’ filled with paddy (rice with the husk on) and coconut tree flowers, again a symbol of auspiciousness as rice and coconut are the two staples of Kerala cuisine. The ‘para’ or the ‘nirapara’ is a measuring pan that has traditionally been used to measure paddy after harvest. The ‘para’ of yesteryear was crafted out of jack fruit tree wood that had ornamental beading attached to the outside to account for the expansion or contraction due to climatic changes. As the use of ‘para’ relegated in popularity, it went through a facelift and emerged in an all brass form as a decor accessory.

Traditionally the lamp is lit with a ‘changala vatta’, which is a smaller long leaf lamp with an oil reservoir in the middle. Can’t really see it in this picture (you can see the oil reservoir and the tail of the lamp if you look closely) but you will get a better view in the next one. 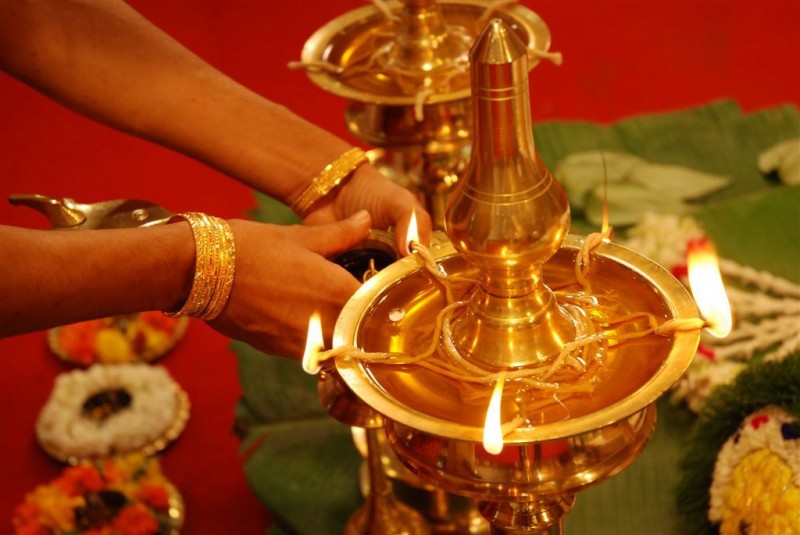 Again, now a days the nilavilakku is used more for decor as in the picture below (the first one on the left of the statue) from my great uncle’s house. The portraits are of my two great uncles/grand uncles, my grandma’s brothers, two men who have inspired me (and every person that they have crossed paths with, I’m sure) in many ways with their love for tradition and everything old. I can dedicate entire posts to them and their antique collections; Sq. Ldr N.G. Bhaskaran and N.G. Ravindranath. 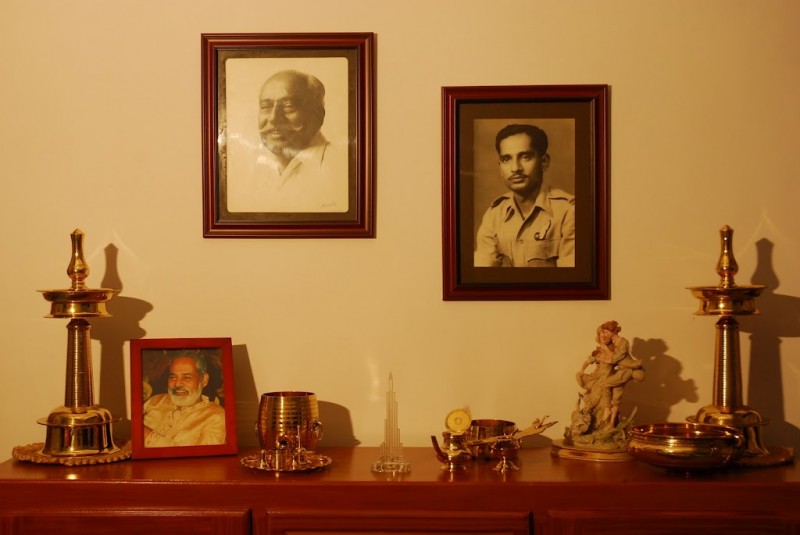 Coming back to the post, you can see the nilavilakku (2 in this case), a smaller version of the ‘para’ (at the right of the photo on the sideboard), ‘changala vatta’ (on the left side of the figurine), ‘uruli’ (next to the right vilakku), ‘ashta mangalayam’ (in front of the para) , and ‘kindi’ (left of the empire state statue) in the pic. The vilakku and the para can also be displayed separately like in my parent’s home. 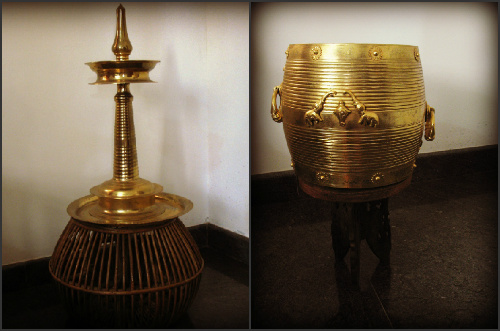 Just realized that this is going to be a way too long post. So details about the uruli and ashta mangalayam have to wait till next week.

You cannot talk about Mallu decor and specifically Vishu and not mention the kani konna, the golden shower tree (botanical name Cassia fistula) which is an integral part of the kani, an auspicious display of goodies that you see as soon as you wake on the new year day. The clusters of yellow flowers represent prosperity and good luck. It is the state flower of Kerala and the national flower of Thailand. This tree in full bloom is from my aunt and uncle’s yard. By the way, they have great home, will feature soon. 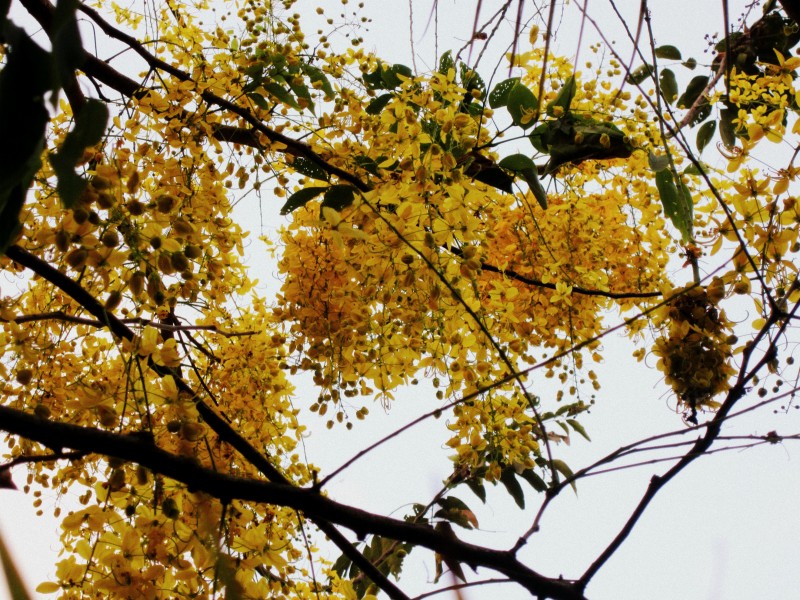 Wishing everyone  a great weekend and to those of you who celebrate, a fabulous New Year! 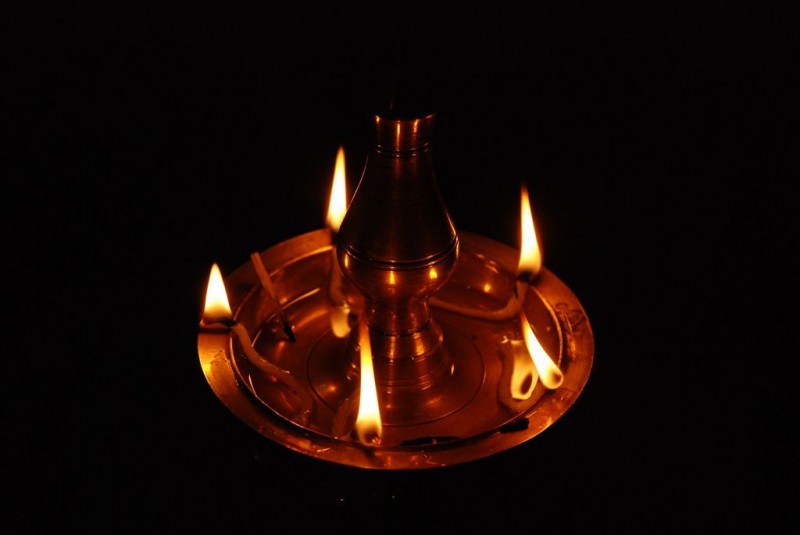