Hope y’all had a great Thanksgiving. Can’t believe it is December already! Off late life has been so busy, the usual work and family stuff, that I’ve hardly had the time for it to sink in. What do they say, living by the moment? That’s what I’ve been doing since the Summer. Anyways, recently we did some major cleanup as we got our basement ready for a makeover (see how this project crept up from nowhere in my To Do list post). This included getting rid of a very bulky entertainment center, a twin bed, 2 toddler beds, and few other things that we brought along with us when we moved from NJ but never used in this house. No idea why I was holding on to these for the last 6 years! After my experience with disposing off those unwanted pieces over a period of 2 months I think I’ve learned a thing or two that I would love to share with you all. In fact when I tried to search online on how to get rid of old furniture nothing much came up from folks who have actually done it recently. So here we go;

This seems like a no brainer, to list it on Craigslist. Depending on the condition of the piece you could try posting it in the For Sale or Free section. Frankly lately we haven’t had much luck with Craigslist, in fact other than some dubious inquiries we got nothing on the entertainment center. But we did have great luck when we posted our bulky couches a few years ago. Actually the first time we posted there was no interest. We took the listing off and put it back 2 months later and it was gone in a week! Remember this old guy? 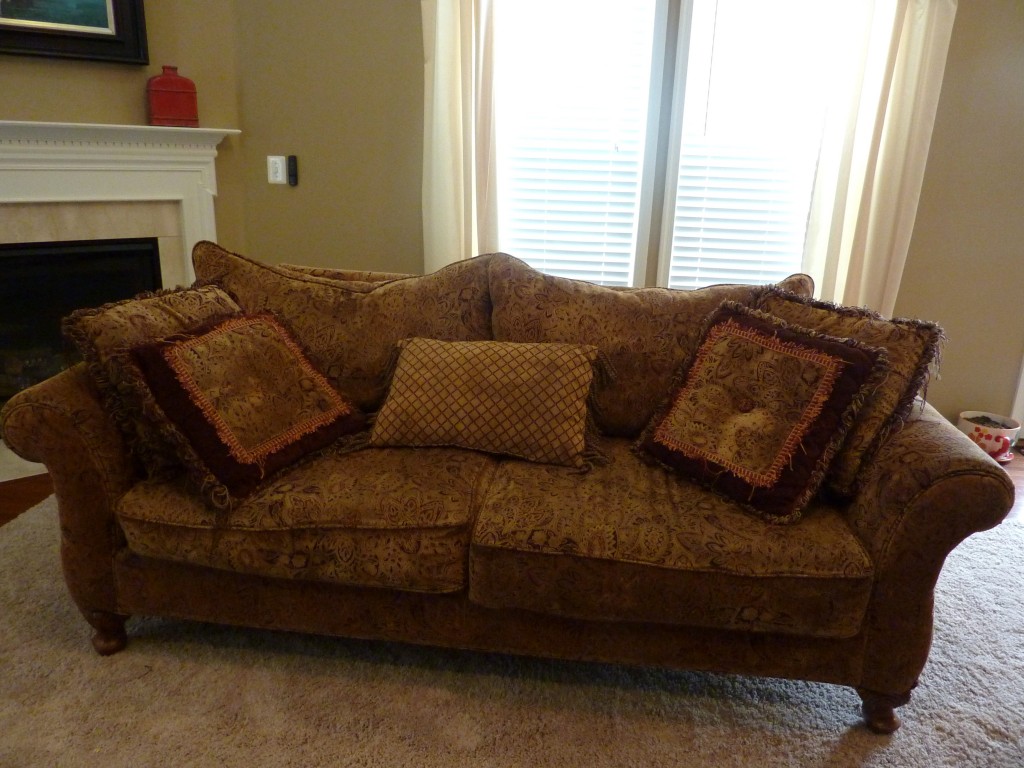 The important thing about listing on sites like these is to be patient.

This option comes up every time I searched online on how to get rid of old furniture. Though it is a noble cause it is not as easy as it sounds and is sure to disappoint you if the furniture has even the slightest scratch. In my case scheduling the pick up with Salvation Army went like a breeze. Got to give bonus points on their website, it is so easy! We had the very heavy oak entertainment center, a twin bed frame, 2 toddler beds, several kids’ books, and toys to donate. 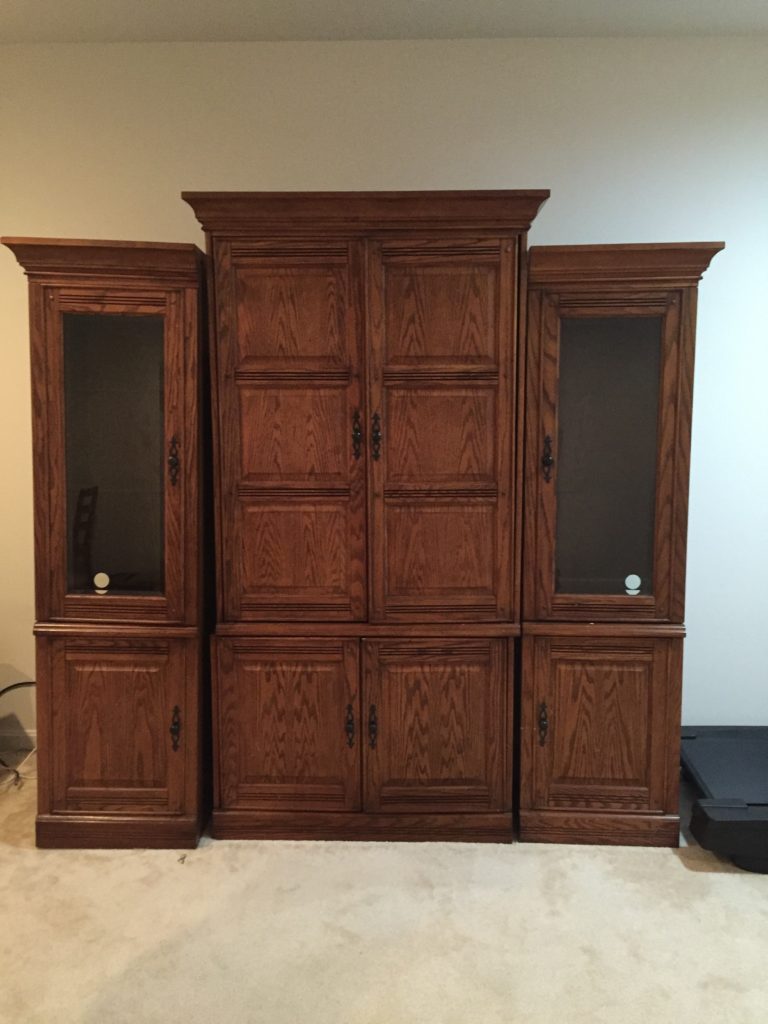 The moment the 2 Salvation Army delivery/pick up guys entered my house why did I get the sense that they had already made up their minds about the entertainment center, that they won’t be taking it? Granted it is heavy, it is solid oak cost us a good grant when we bought it. I had mentioned that in my comments while scheduling so they would’ve known. I felt that he was looking for a reason to say no and he found some paint chipped away on the TV stand. See that black thingy inside? On that! Otherwise it was in mint condition! It could have been an easy paint touch up job for me had I known! 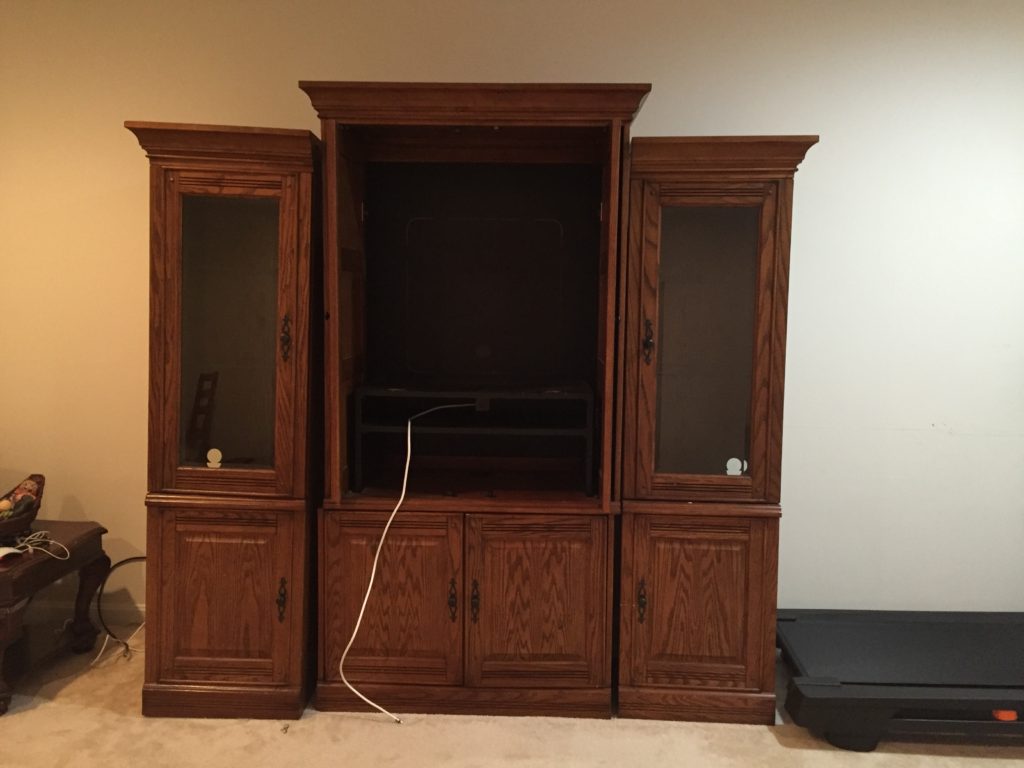 For the twin bed frame we had lost the screws that attached the frame to the headboard (any long screw from the hardware store should have worked) so that was a no go. One of the toddler beds needed a paint job (the one in the next pic), which meant nay too. They ended up taking only one toddler bed, books, and toys. So lesson learned, unless your piece is in mint condition, wait aren’t we talking about used furniture,  charities DO NOT accept it. A well loved piece or even some thing with a small scratch has a high chance of being rejected.

These have come to my rescue so many times, when buying or selling. This time too they didn’t disappoint. Like with Craigslist you could list the item for sale for a nominal amount or free. In our area there are specific groups for free stuff. Since I’d already decided on donating them I listed all three, entertainment center, twin bed, and toddler bed, for free. The IKEA toddler bed that needed new paint but otherwise was in great condition was picked up by a lovely family. 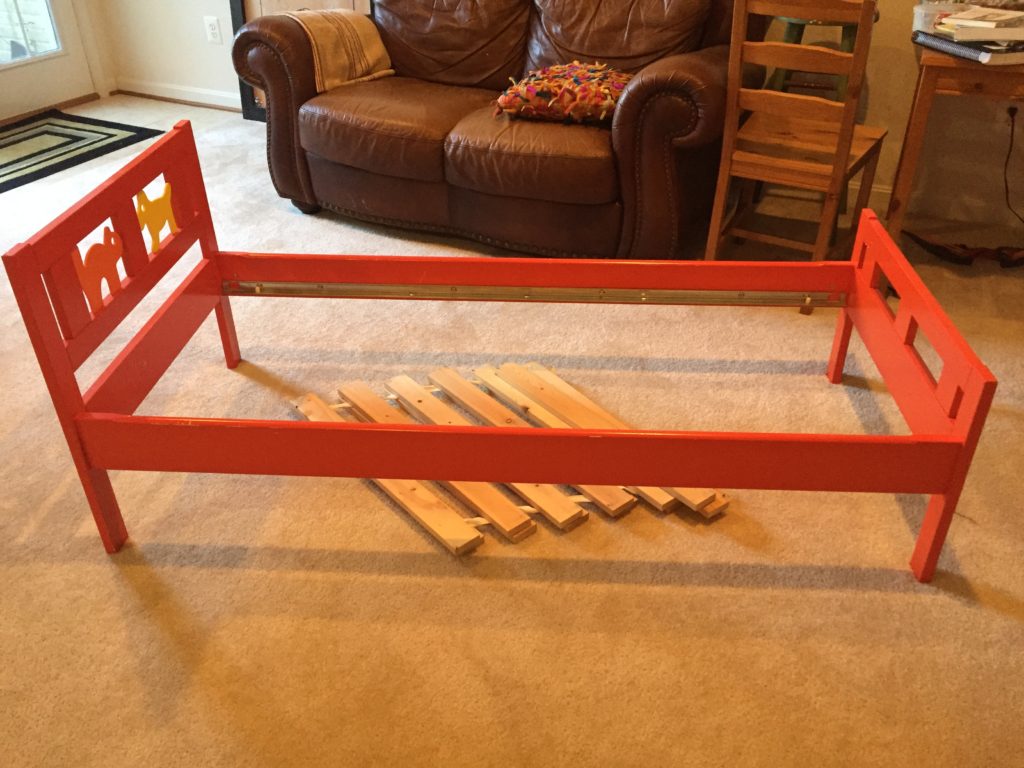 Same with the twin bed. It is such a joy to hear back from the folks who took those pieces that their kid is so excited about it. The entertainment center was picked up by a husband and wife where the wife had big plans of repurposing it. Such a nice feeling that the furniture went to folks who really appreciate it unlike the vibe I got from the Salvation Army drivers.

Since it is FB you can actually checkout the folks who reply to your posting unlike Craigslist. It is reassuring to know that the inquiries are coming from legit people. You might even have a common friend or two.

It takes time, be patient. Especially for bulky items that need extra help and a truck to move. I might have had at least 10 no shows or people canceling at the last moment on the entertainment center. Don’t lose heart the right person will come along eventually.

Like Craigslist’s Free section The Free Cycle Network is solely dedicated to listing stuff for free. I personally have not used it but have coworkers who swear by it. My coworker was able to dispose off a mattress and furniture by listing on freecycle.org when she got married and moved into her husband’s home.

Again not something that I have used but have a lot of neighbors who have. You call your regular trash pick up company and schedule a date with them to pick it off your curb. The catch however is that you have to move the furniture from wherever it is stored to your curb. Another thing is that it is going to the landfill which doesn’t make sense if the piece has a lot of life still left in it.

There are companies that will remove your old furniture aka. junk from your home for a fee. This is great when you are short on time or don’t have the patience to post, wait, and coordinate pick up with potential takers but it can get costly. My cousin paid $100 to get rid of an old couch.

Leave it Out on the Curb

Something that gets recommended a lot but as with the bulk trash disposal you have to move the furniture pieces to your curb. If you are lucky someone will pick it up or if not you will get a notice from your HOA. 🙂

You could always repurpose the piece. We actually toyed around with the idea of converting the entertainment center into an armoire or a storage unit in the unfinished area of the basement. But the realization that with all the changes we’d planned for the basement we won’t have any room for it changed our minds. I’ve seen folks turn smaller entertainment centers into kids play kitchens and even dog beds. 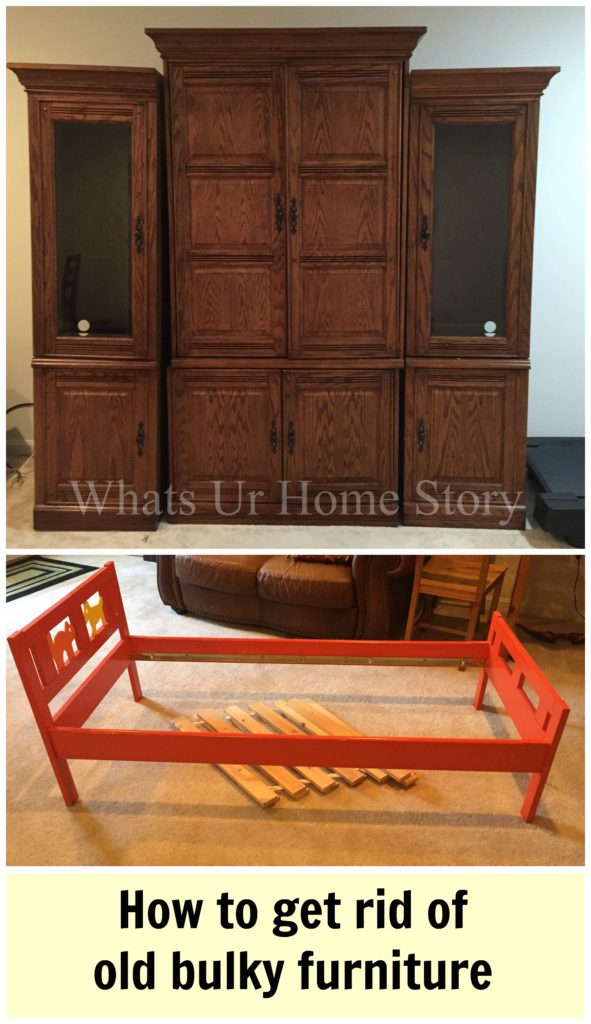 Have you got other tips on how to dispose off bulky old furniture?