The Merchant of Venice, the comedy of how Bassanio and Portia help their friend, Antonio escape the greedy clutches of the money lender Shylock, was my first foray into Shakespeare’s plays. More of the Bard’s works followed through the course of my 6th grade English class. With each play my admiration for the playwright increased and soon enough his birthplace, Stratford-upon-Avon, earned a spot on my bucket list as one of the places to visit.  Over the summer I finally got to cross this quant little English village off my bucket list! Yay! 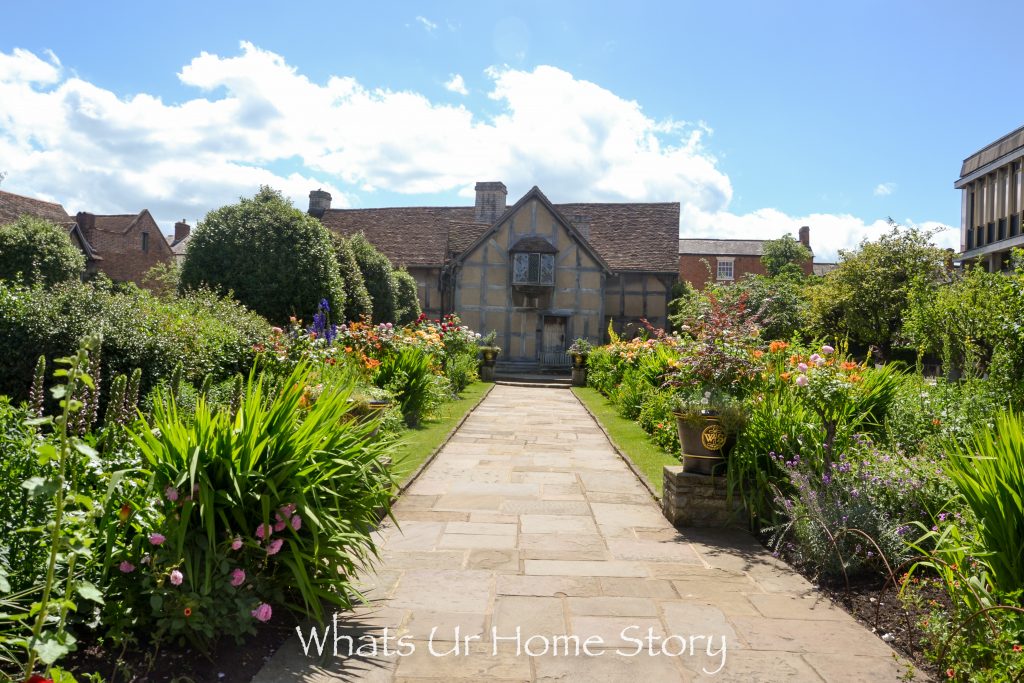 I had read up well on the place so knew what to expect; that the house Shakespeare was born was a tudor and in the center of the town. While the quainter true English cottage that we usually associate with the place is actually his wife, Anne Hathaway’s childhood home. 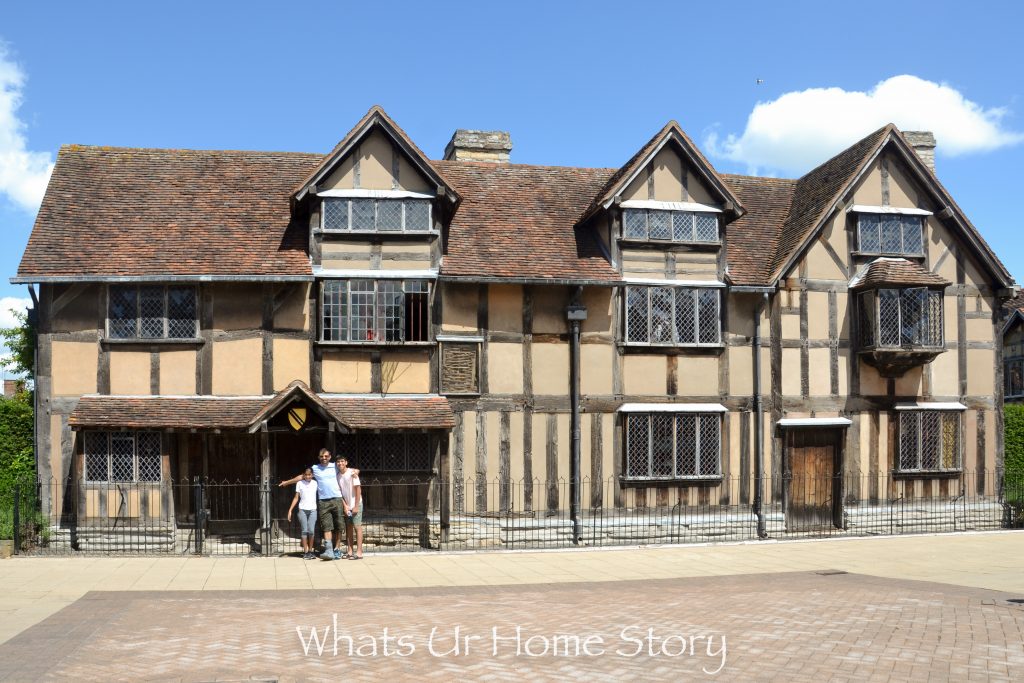 What I was most surprised by was how crowded and touristey the Henley St, the street on which the house is located is. The picture above, which is the back of the house, was taken during that one second when no one was in front of the house. 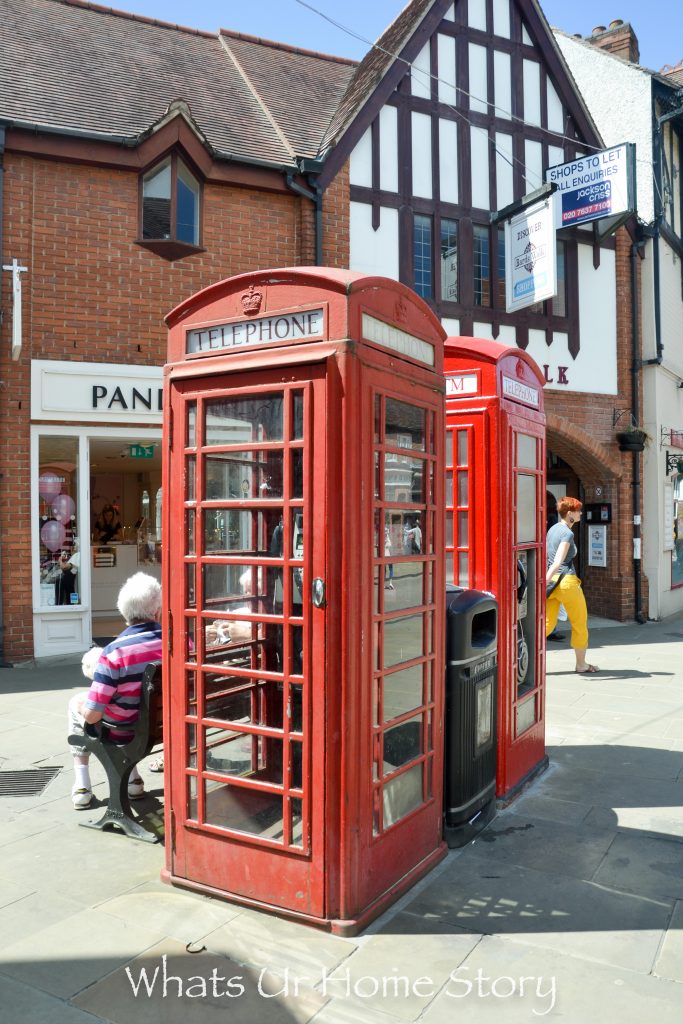 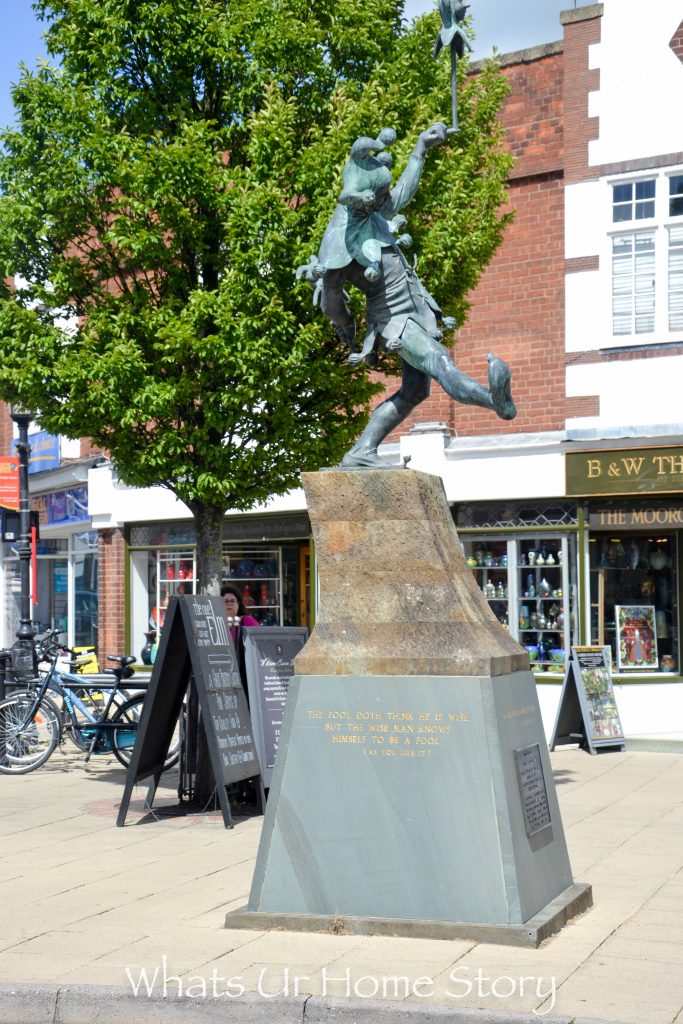 Shakespeare’s father, a glove maker had a store at the right side of the house and used  to sell his goods to walkers through the second window from the right on the main floor.  The front of the house is the first picture. 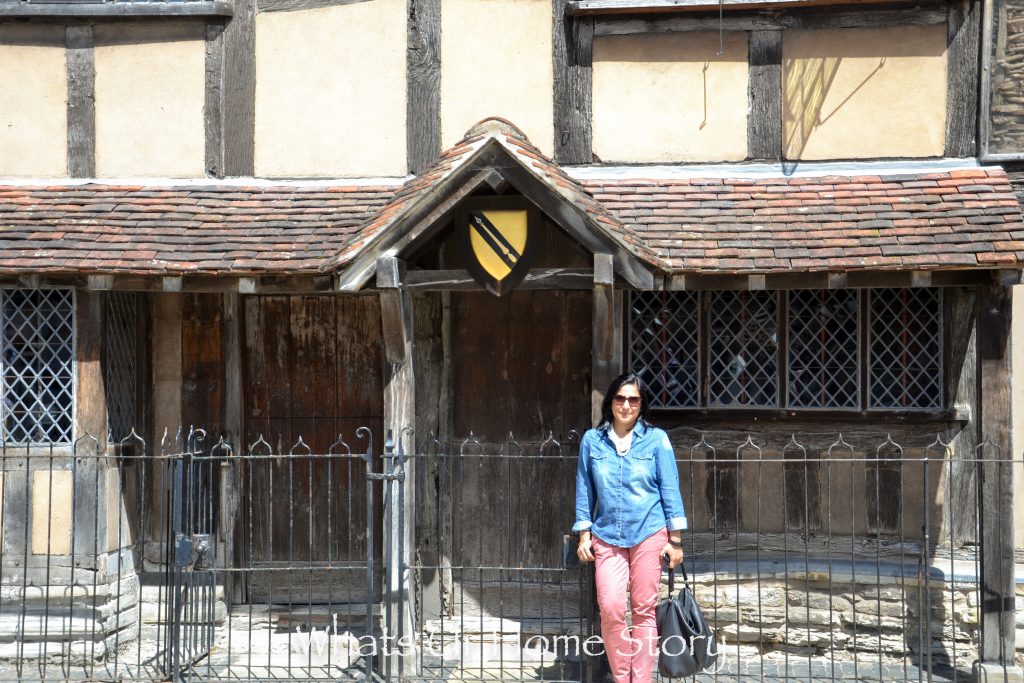 Before you enter the house there is a small exhibit about the famous playwright where they have displayed The First Folio, the first collected edition of Shakespeare’s work from 1623. 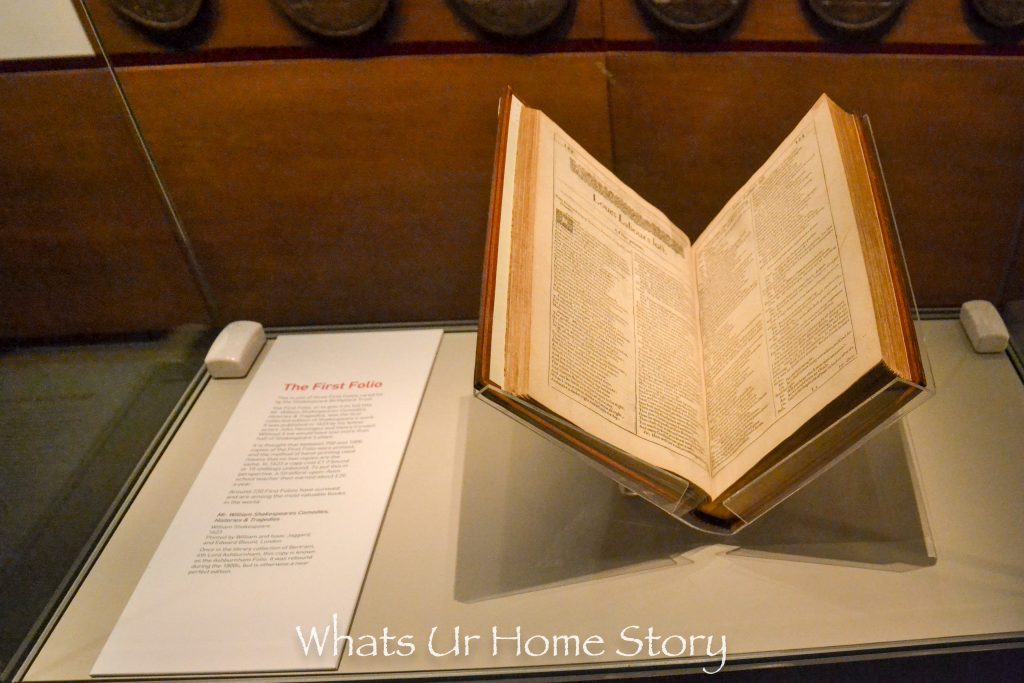 The inside of the house is quite modest, keeping with their means. Their family room. 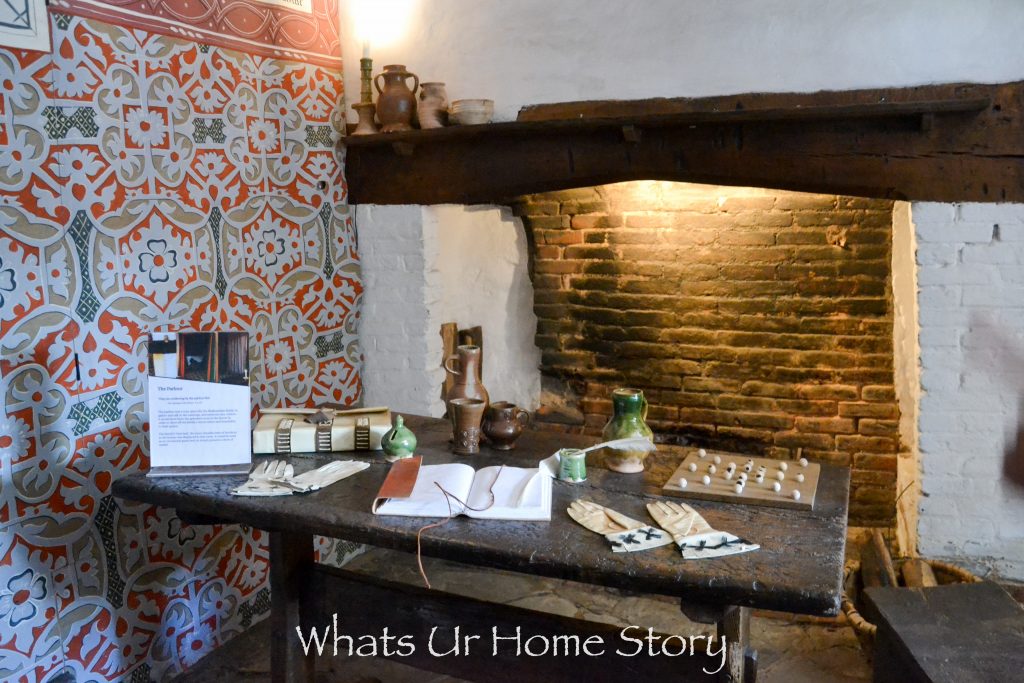 The dining room where he and his siblings used to have their meals. 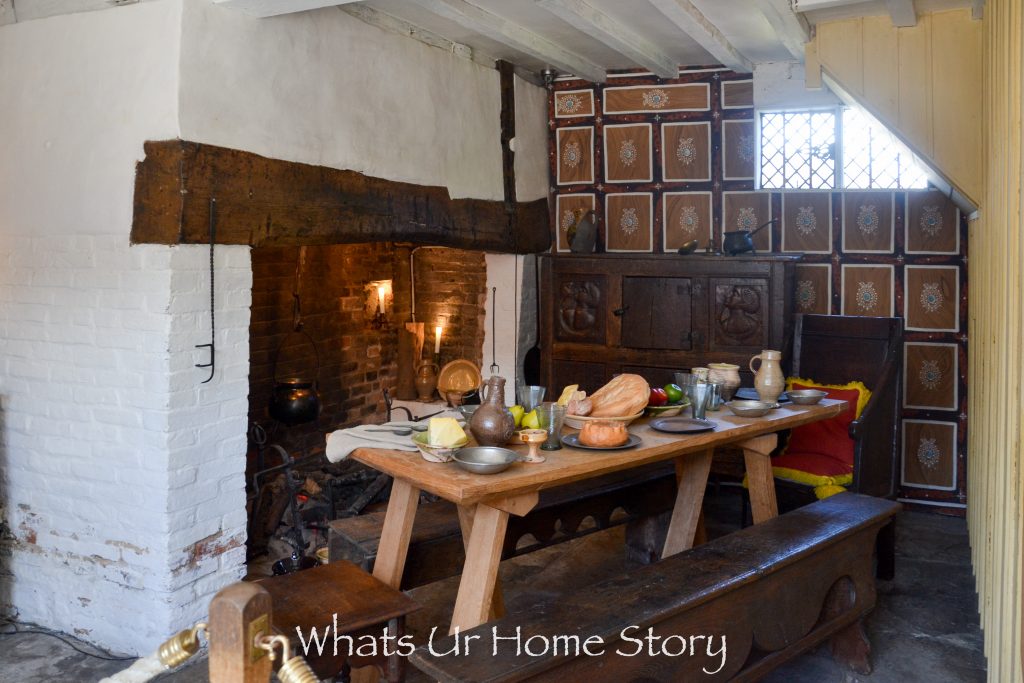 The house was used as an inn/ lodging house over the years. The Shakespeare Trust, which maintains the place has tried to strip away a lot of changes that were made during that time and bring the place back to its original days. His parents’ bedroom. 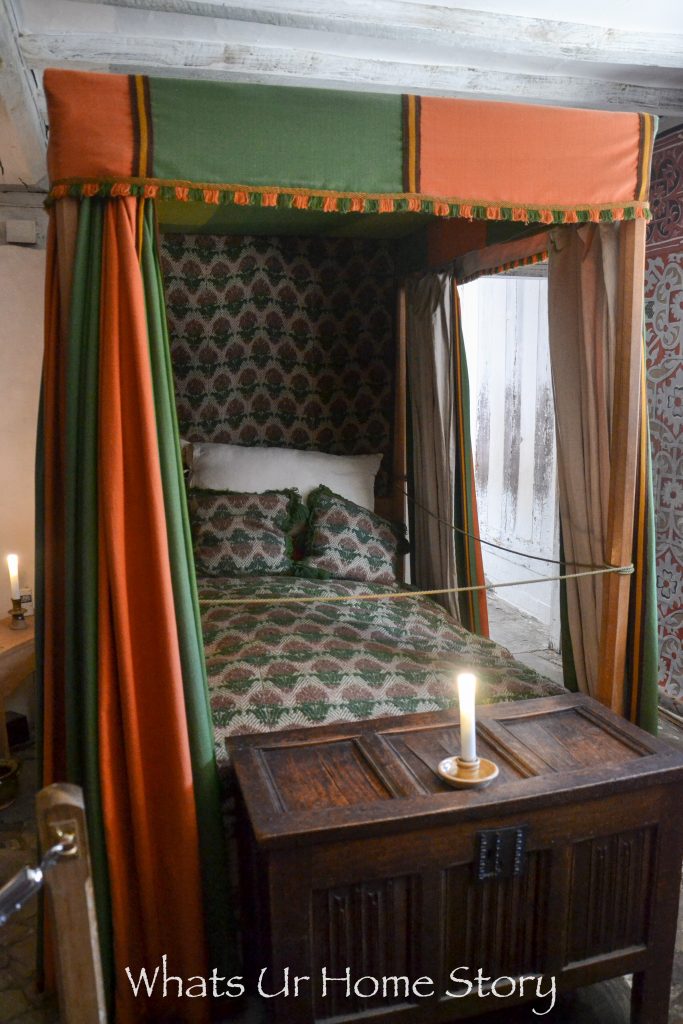 His room and the bed he shared with his brothers. 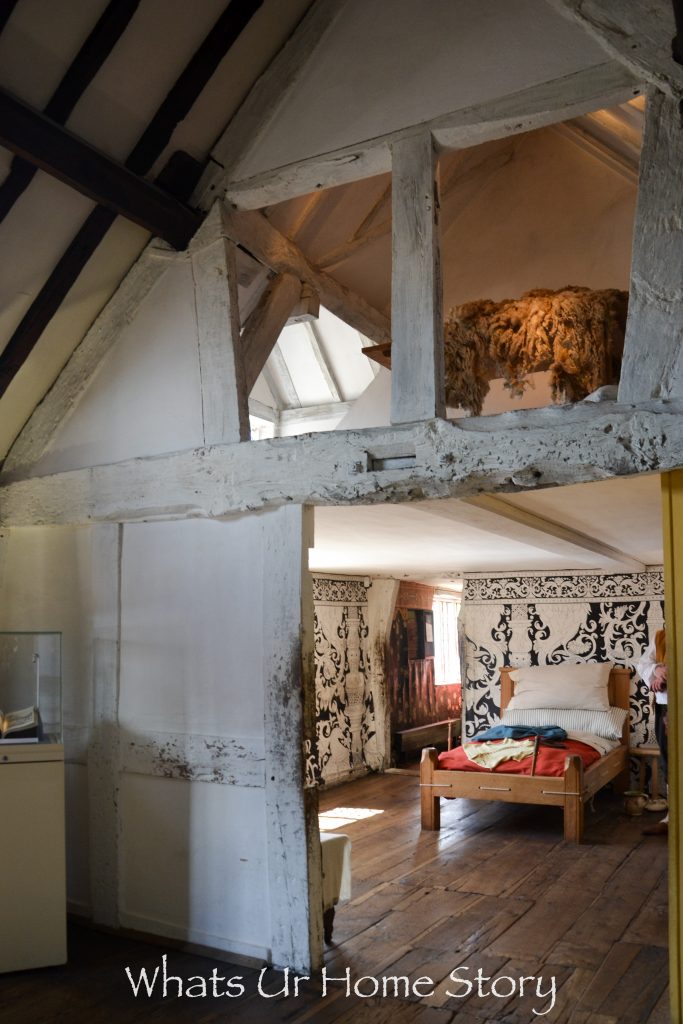 The bard’s birth room window. They had to remove it from the actual room for safety reasons and store it inside the house. Over the years it sort of became a pilgrimage spot among his fans and people would throw coins and souvenirs at the window and it started getting damaged. 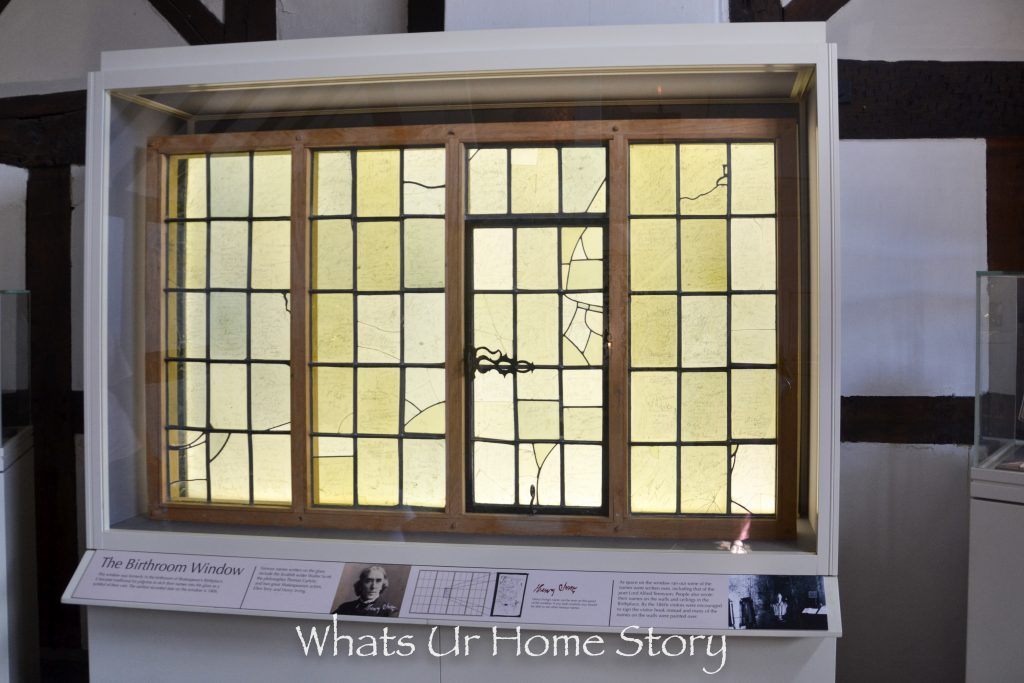 The courtyard at the side of the house. Actors enact scenes from his plays there. 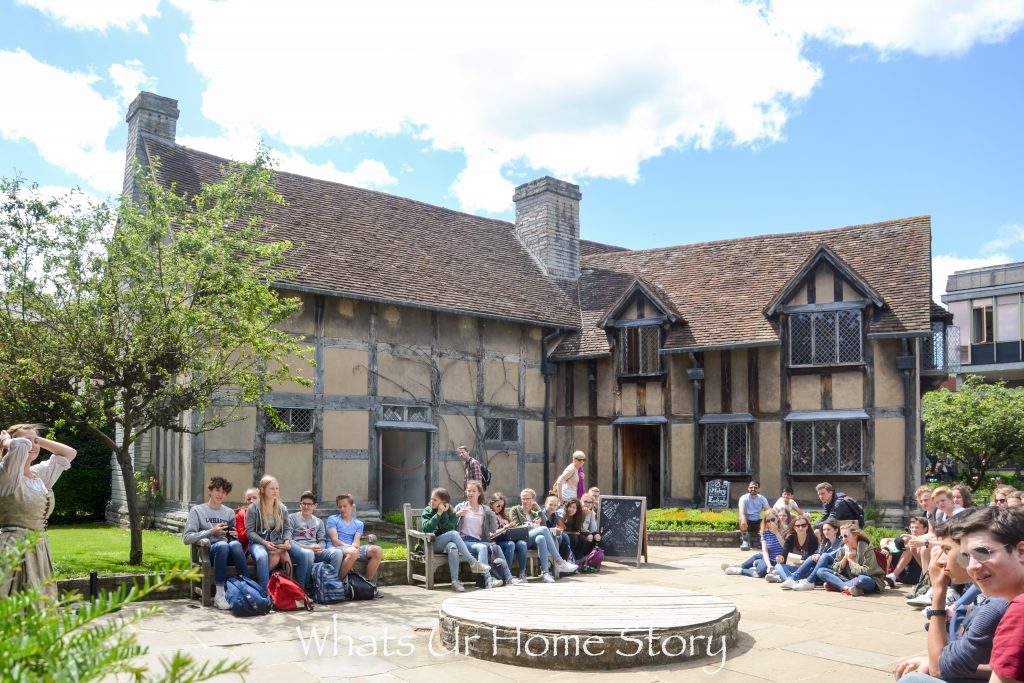 Now for the charming part of the tour, his wife’s childhood home. The Anne Hathaway’s cottage is about a 15 minutes drive from his house and is a MUST SEE! It is everything you have heard about an English cottage, the thatched hay roofs, the cottage garden, every thing oozing Englishness. 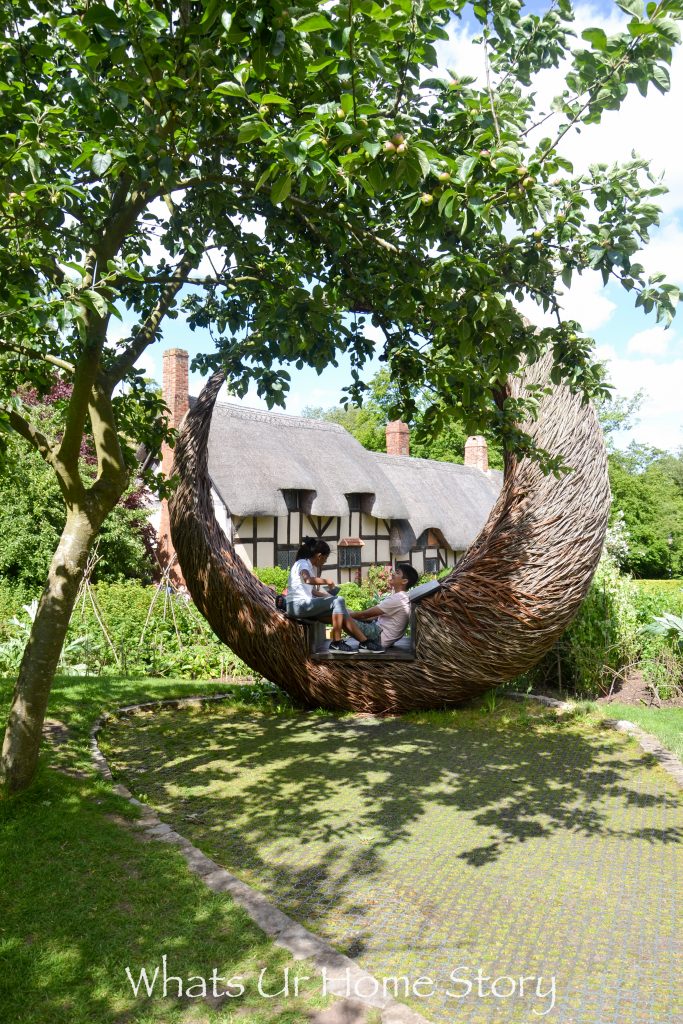 A close up of the cottage. 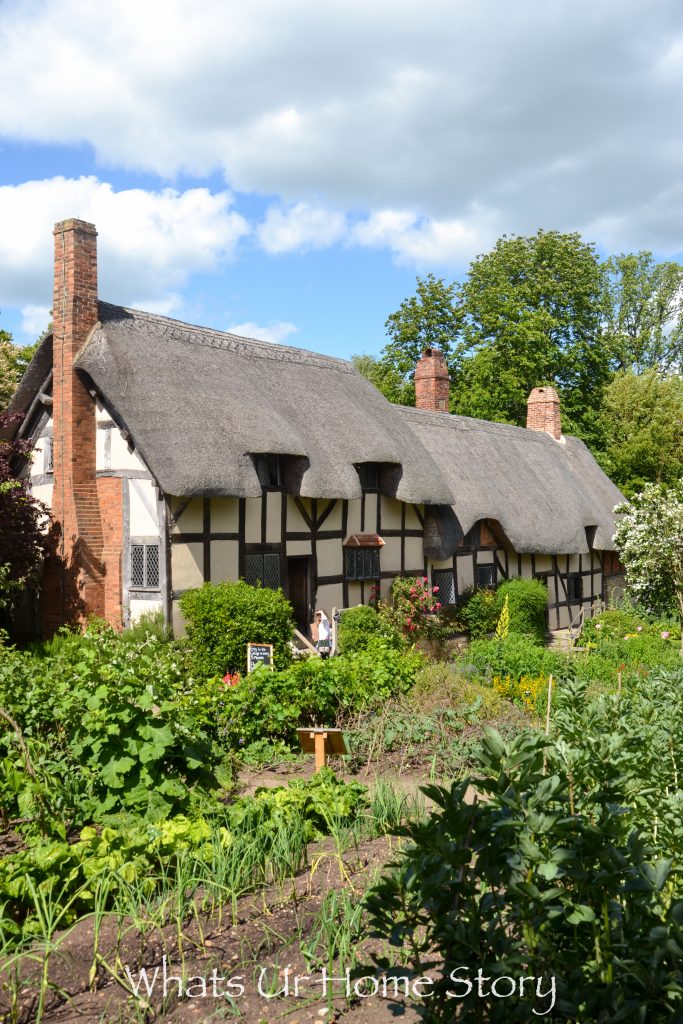 Anne Hathaway’s family rented this house for a very long time only buying it from the owner in the later years. The interior is similar to that of Shakespeare’s. 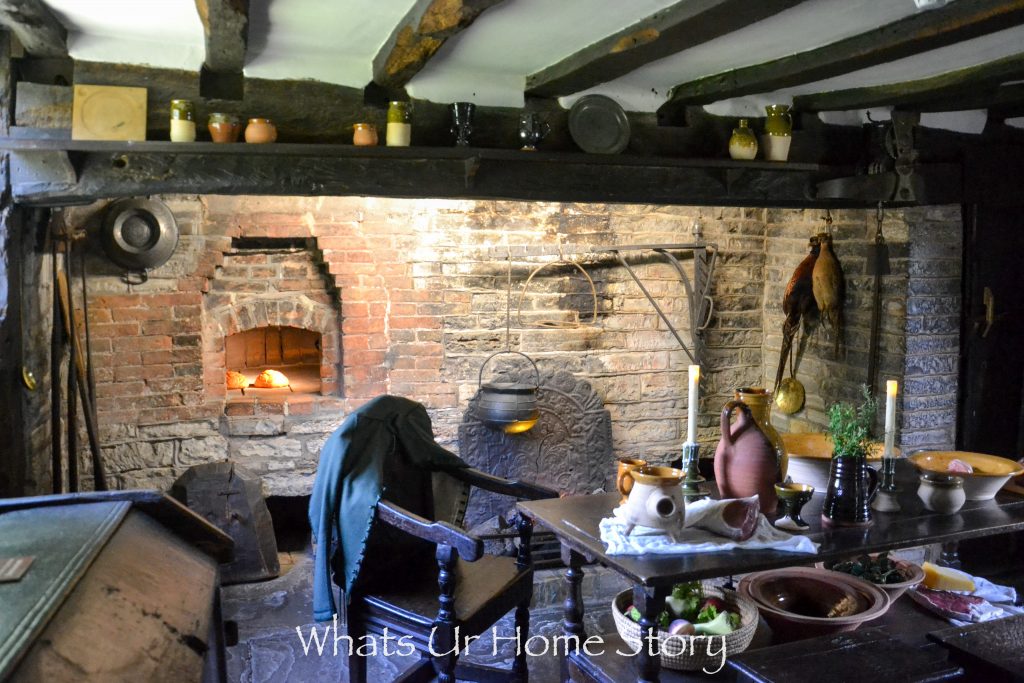 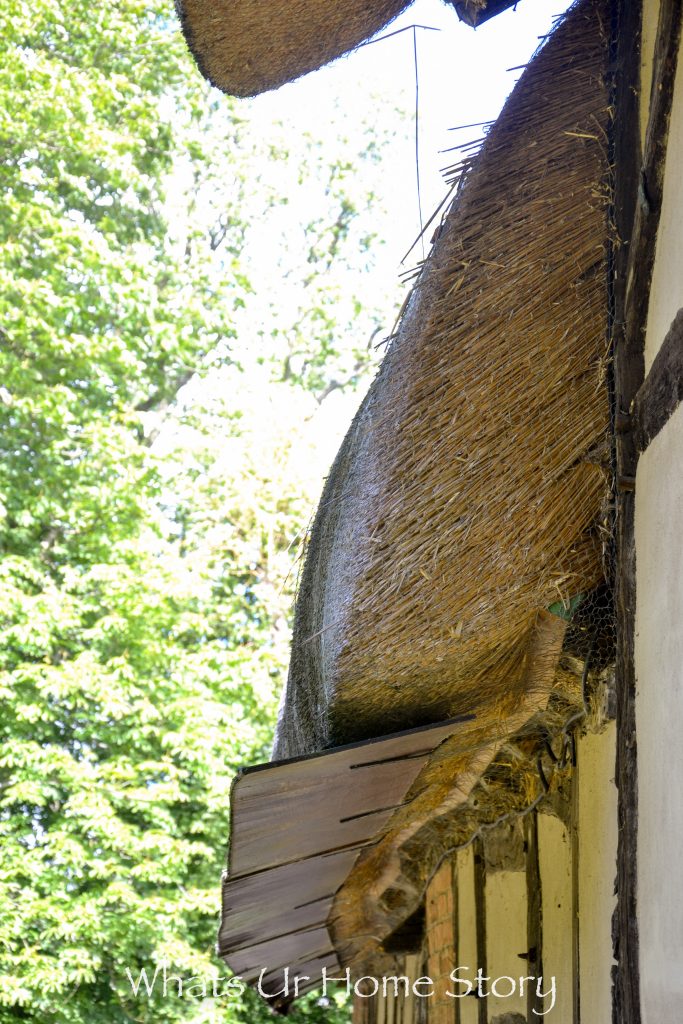 When we had visited most of the flowers in the garden were only starting to bloom. 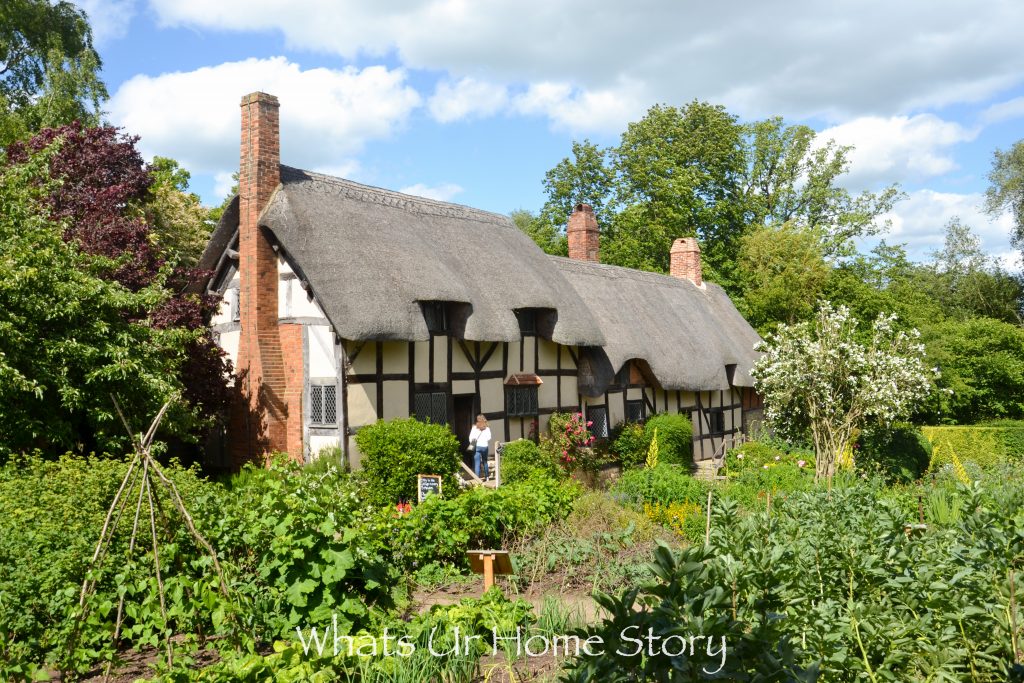 They had fox gloves, roses, and huge mock orange trees. Both B and I fell in love with the mock orange at the very spot. We came back with plans of adding it to our yard. 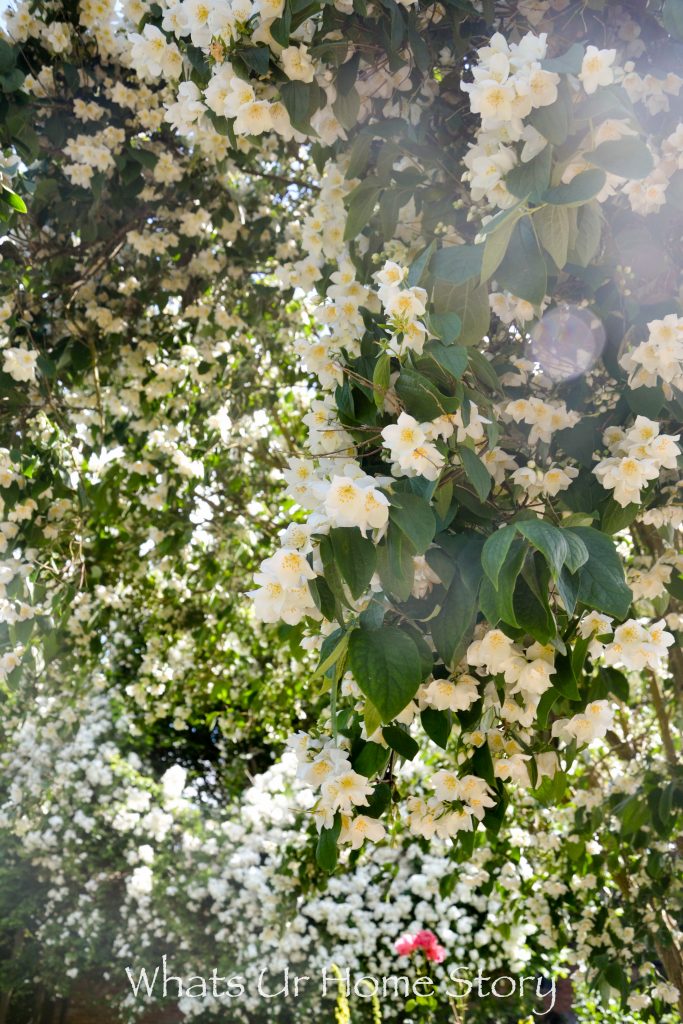 A view from the other side of the house. 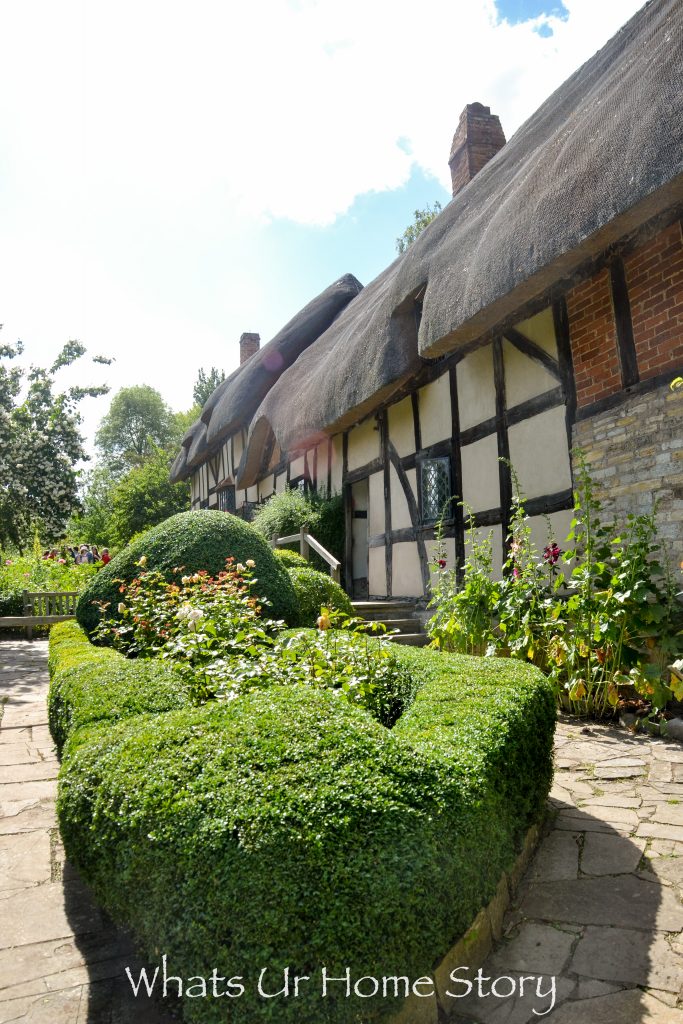 Are you a fan of Shakespeare? What is your favorite play?